The Women of Fall Sports

To commemorate the 50th anniversary of the passage of Title IX, Ohio Northern University is sharing the stories of a few iconic female athletes from the past. Discover how their participation in ONU Athletics influenced their future course.

From college player to collegiate coach

At ONU, she made history as a member of the first women’s soccer team to make it to the NCAA Division III tournament and to win an NCAA tournament game.

“I love that going to the NCAA tournament is now the standard (for ONU women’s soccer) and it’s just a question of how far they can go,” she says.

Playing soccer at ONU gave McGowan lifelong friends and supporters. “Going back to campus, seeing old coaches and professors, and knowing that they believed in a much younger version of who I am today, is something I am beyond appreciative of,” she says. “I’m always proud to be a Polar Bear.”

Soccer is a “players’ game,” says McGowan, because there are no timeouts and no specific game plans that always work. That’s what she loves about the sport. “The game of soccer is seen, coached and executed differently from all perspectives.”

Before taking the head coach position at Austin Peay, McGowan coached in the women’s soccer programs at Miami (Ohio) University, Hiram College and Agnes Scott College, while leading programs at Olivet College and Thomas More University. Her philosophy as a coach is simple: work, compete, fun.

“Your work rate and level of competitiveness that you bring are completely controllable. I believe that if you are working your hardest and competing at the highest level, you are having the most fun,” she says.

In the late 1990s, Mandy (Miller) Yates, BSPh ’01, had an amazing career as a cross country athlete at Ohio Northern University, and she hasn’t stopped running since.

Mandy recalls that she was “still very naive to college racing” when she qualified for the NCAA National Cross-Country Championship in 1996. Her ONU coaches not only prepared her mentally and physically to compete at this level, they motivated her to continue reaching for the stars.

Through cross country, Mandy met lifelong friends and her spouse, Brian Yates, BSEE ’01. “Brian and I enjoyed running together so much we decided to become lifelong running partners by getting married in 2002!”

ONU inducted Mandy, who was a 1997 All-American and one of the cross country program’s all-time greats, into the Athletic Hall of Fame in 2011.

Today, Mandy is a pharmacist and also the coach for the cross country team at her children’s high school in Florida. She and Brian continue to run together and in 2011 they both ran the Boston Marathon. Mandy also qualified and ran in the Marathon Olympic Trials in 2012. In the past few years, the couple has started competing in a new type of racing called SwimRun, which is a mix of swimming and running.

“Running is a passion of mine,” says Mandy, “I love how running is something that everyone can participate in. Each runner can make and strive to meet their own goals. I love sharing my passion with my family and other people in my community.”

Her advice to today’s ONU cross country student-athletes? “Life is a huge adventure. There will be great times and not so great times. Remember the best parts, learn from the rest and move on. Most important of all – Keep Running!”

True passion for competing and coaching 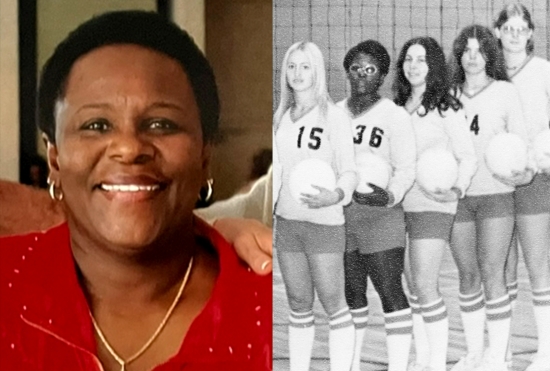 She recalls wearing the same uniform for years and not having adequate transportation for games in the 70s. “And I will always remember getting out of class and going to Ada park to drive the tractor for softball game prep!”

Maggi grew up in a family of 13 children and her dad died of an aneurysm when she was just 12 years old. She was the first in her family to go to college, so she placed a lot of pressure on herself to do well. She excelled in three sports at ONU: volleyball, basketball and softball.

“I was blessed to be coached by caring, professional and intelligent coaches who instilled great work habits, pride and knowledge about the sport and life,” she says. “(I encountered) so many caring and professional people on campus. I always will be grateful.”

Maggi turned her gratitude into action, and devoted her entire career to being a caring teacher and coach. After ONU, she joined the staff at Sidney Local Schools (her hometown) where she coached varsity softball (five years) and basketball (19 years) and taught health and physical education for 35 years. She then continued as associate athletic director, retiring in May 2021 for total of 43 years!

Her advice to ONU female athletes: “Cherish the many opportunities at prestigious ONU because the coaches and athletes struggled to get them… And enjoy the ride!” 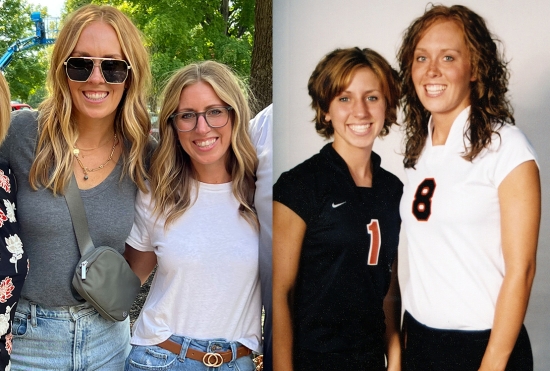 For the Kanukel sisters, their favorite highlight from ONU Volleyball was getting to play on the same team for two seasons.

They are grateful for the strong women who, decades earlier, paved the way for them to play sports at a high level.

Karlee says: “I was certainly blessed to reap the benefits of those who pushed for Title IX and endured the difficulties of playing/coaching female athletes 50+ years ago. Since then, we have seen significant growth in female athletics from youth to professional, making the level of competition sky rocket.”

Playing volleyball at ONU taught the sisters life skills, including resilience, confidence, discipline and a growth mentality, they say.

“The culture of family that I was a part of during my years as a Polar Bear helped to shape me into the woman I am today,” says Hannah.

Karlee adds: “I often tell people my experiences at ONU made me a better person.”

The two sisters share more in common than just volleyball. They both met their husbands at ONU and they both have four children! 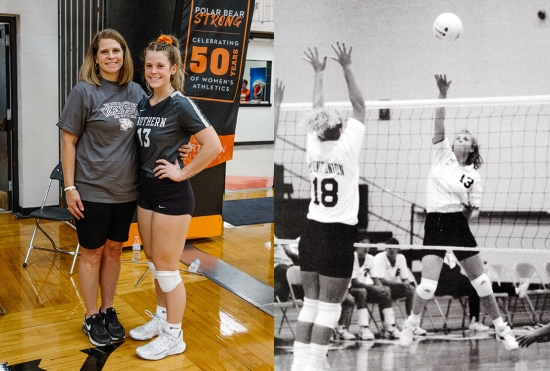 Lisa McFadden, BS ’96, dug into her closet and lo and behold she still had it: her 1995 pullover emblazoned with her ONU Volleyball jersey number!

Lisa is thrilled to wear the pullover once again, this time in the stands. Her daughter, a senior exercise physiology major, Lea, is sporting lucky #13 on her jersey this season, the same number her mom wore.

For mother and daughter, playing volleyball at ONU is something they’ll always cherish.

Lea says: “To play volleyball at Ohio Northern University means to be part of something bigger than myself. I have learned what it means to take responsibility, earn respect, cherish teamwork, and seek dedication all while being a student-athlete at ONU.”

Lisa adds: “There is just a special bond that developed between teammates and coaches while I played volleyball at ONU. Even when you haven’t seen a teammate for several years, you are able to just pick up right where you left off.”

She continues: “I have such pride being a Polar Bear volleyball player, and I think that pride is multiplied having Lea be one, too. I have told so many stories of playing volleyball at ONU to my children over the years. (My kids always tell me that they have already heard that story, but I keep telling them anyway – ha ha ha!) Now, Lea will have her own stories to tell her children one day. It’s so cool to see her in #13. It brings back so many great memories for me!”