Qatar World Cup: FIFA writes to teams and says ‘focus on the football… not ideological or political battle that exists’ | Football News


FIFA have written to World Cup teams urging them to focus on the tournament in Qatar and not be part of lecturing on morality and dragging football “into every ideological or political battle that exists”.

Sky News has exclusively seen the full letter from FIFA’s president, Gianni Infantino, and the governing body’s secretary general, Fatma Samoura, that has been sent amid growing pressure on players to be activists around the tournament.

It has been a World Cup build-up dogged by concerns about the suffering of low-paid migrant workers to build the infrastructure in the tiny Gulf nation and discriminatory laws that criminalise same-sex relations.

“Please, let’s now focus on the football!” Infantino and Samoura wrote to the 32 football nations contesting the World Cup.

“We know football does not live in a vacuum and we are equally aware that there are many challenges and difficulties of a political nature all around the world.

“But please do not allow football to be dragged into every ideological or political battle that exists.”

The letter does not address the request by England and Wales and six other European nations for their captains to wear “One Love” multicoloured armbands at the World Cup which are a response to concerns about Qatar’s anti-LGBTQ+ laws. Both British nations have already said they would defy any ban by FIFA. 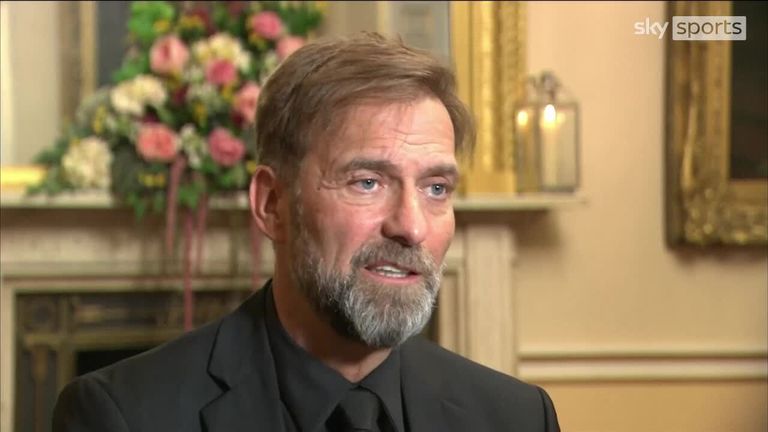 Liverpool manager Jurgen Klopp believes the players shouldn’t be blamed for wanting to participate at the World Cup in Qatar, despite the controversial awarding of the tournament

Infantino wrote: “At FIFA, we try to respect all opinions and beliefs, without handing out moral lessons to the rest of the world.

“One of the great strengths of the world is indeed its very diversity, and if inclusion means anything, it means having respect for that diversity. No one people or culture or nation is ‘better’ than any other.

“This principle is the very foundation stone of mutual respect and non-discrimination. And this is also one of the core values of football. So, please let’s all remember that and let football take centre stage.”

Infantino says everyone will be welcome in Qatar “regardless of origin, background, religion, gender, sexual orientation or nationality”.

The letter was sent to the nations competing in the men’s football showpiece with less than three weeks until the tournament begins in Qatar.

Infantino – and his leadership team – was not in place at FIFA when a tainted group of executive committee members voted in 2010 to award the World Cup to Qatar.

The last English team to play in Qatar was Liverpool at the Club World Cup in 2019. And Liverpool manager Jurgen Klopp told Sky News this week it is “not fair” to expect political statements from players around the World Cup.

The German said: “They go there to play football. It’s not about this generation’s players to say now that ‘we don’t go, or we don’t do that’.

“The decision [to hold the tournament in Qatar] was made by other people, and if you want to criticise anybody, criticise the people who made the decision.”

Sky News sports correspondent Rob Harris said: “The letter does indicate that they hope this will be a World Cup without protest but we’ve just seen the build-up in the last few weeks highlighting some of the issues and we expect them to be highlighted by the teams.

“We had those statements from the English and Welsh FAs in September that highlighted their plans to call for the compensation funds for workers who suffered building the projects in Qatar.

“Qatar do say they have improved working conditions but there are still concerns for those people who have died in the country. England and Wales are also planning those OneLove rainbow armbands to be worn by captain to highlight the discriminatory laws – the anti-LGBTQ+ laws in Qatar. This letter from Infantino and Samoura does not directly address those calls to wear the armbands.

“The FA are still awaiting approval but they say they will go ahead anyway and wear them in Qatar. What this letter I’ve obtained does highlight is that ‘no one people, culture or nation is better than the other’. They talk about having respect for that diversity.

“It’s very much saying that teams going to the World Cup shouldn’t be handing out moral lessons to the rest of the world. This is the FIFA leadership asking the teams to steer clear of some of those campaigning messages they plan to use in Qatar under a lot of pressure from external groups like Amnesty International.”

On the rules Qatar has around same-sex relations, Infantino and Samoura tried to ease concerns of travelling fans who identify as LGBTQ+ – but Harris added: “There are some concerns from certain fan groups about going to Qatar because same-sex relations are criminalised.

“Qatar have tried to claim that the laws aren’t enforced but they still exist. While this letter does say that everyone will be welcomed in Qatar regardless of background, religion, culture, sexual orientation and nationality, those assurances aren’t enough for fans who believe a tournament shouldn’t be held in a country where same-sex relations are criminalised.

“It has been an issue in the build up tot the World Cup and it has changed how FIFA will award tournaments in future so this is something that future hosts will be assessed for in terms of their LGBTQ+ legislation.”

‘Letter shows how fraught World Cup will be’

“With less than three weeks to go until the World Cup, pressure has been growing on the teams going, including England and Wales. They’re being called to campaign against the abuses suffered by migrant workers and they’ve been asked to highlight discriminatory laws in Qatar.

“This is also a tournament that Russia are banned from after their invasion of Ukraine, and Ukraine – who didn’t qualify – have been calling for Iran to be booted out as they claim they are supplying arms to Russia.

“FIFA haven’t commented directly on those calls from Ukraine but this significant letter has been sent tonight from the president, Gianni Infantino, and the general secretary, Fatma Samoura.

“It’s a really significant letter – the leadership are saying they don’t want to be handing out moral lessons around the world.

“They’ve not mentioned the England and Wales requests for their captains to wear ‘One Love’ multi-coloured armbands to highlight those anti-LGBTQ+ laws. They say they’ll wear them but this letter shows just how fraught the World Cup will be after a 12-year build up dogged with controversies.”

How to keep up with the ever-changing tech world