Toure, 41, who is currently a Leicester City first-team coach, has held talks with the Championship side and has impressed the owners enough for them to offer him the job.

Wigan, who have been searching for a new boss since sacking Leam Richardson last Thursday, are expected to announce their new manager over the weekend.

Toure’s brother Yaya was also considered for the role but he will be staying in his current job at Tottenham where he is part of the academy coaching staff.

Former Ivory Coast international Kolo Toure, who retired at the end of the 2016/17 season at Celtic, took up a coaching role at the Scottish Premiership side in September 2017.

Toure then followed Brendan Rodgers to Leicester in February 2019 when the Northern Irishman took over as Foxes manager.

But Toure now looks set to take up his first management role at Wigan, who are currently in the Championship relegation zone in 22nd.

The Latics dismissed Richardson just two weeks after they handed him a new three-year deal after the club went on an eight-game winless run.

On Friday night, Richardson released a statement on his Wigan sacking via the League Managers Association.

He said: “I am incredibly saddened to have left Wigan Athletic Football Club and that together, we will not be able to finish what we started. I consumed myself with all departments of the club every single day and with the club still in transition, I felt we were making great strides, both on and off the pitch, to put Wigan Athletic in a place to return to the top end of the football pyramid, where it belongs.

“It has been an honour to manage and coach such a fantastic football club over the past five-and-a-half years. I have worked hard to represent myself and the football club to the best of my ability, to develop players and staff, and to build an environment and a culture that runs through the club, from the first team to the academy.

“There have been so many memorable moments. Breaking many records, gaining two promotions, FA Cup runs including the incredible victory against Man City, maintaining Championship status for the first time since relegation from the Premier League, and many others. Two of the most recent memorable days came at Hull City, avoiding relegation in a season spent mostly in administration and in the midst of a pandemic, with the fans watching from afar, and the Championship promotion game against Shrewsbury, that we were fortunate enough to share together.

“To have a stand named after me is very humbling for both me and my family and is something I will be forever grateful for. I can honestly say, the best success for me is not the trophies or medals, it is seeing many of the players grow and improve as people in their profession and develop into Championship, Premier League and international footballers.

“Although managing in some of the most difficult circumstances, I will forever look back on this period with pride and joy. I am not sure any football club has gone through such a transition, from administration, finishing with only three players and no support staff, to becoming champions of such a competitive league. It was an outstanding achievement for everyone involved. To be given the opportunity of helping to build this football club, with its proud heritage, from the ground up to where it now sits in the second tier of the English game is something that I am grateful for and I hope we made the football club, the fans and the town proud once again. 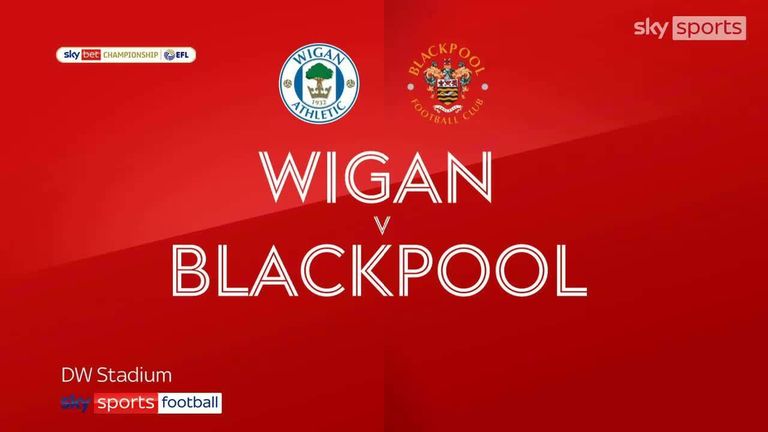 Highlights of the Sky Bet Championship match between Wigan Athletic and Blackpool.

“I would like to sincerely thank and express my gratitude to Mr Al Jasmi, the Chairman Mr Talal Al Hammad and the Board of Directors for giving me the opportunity to manage such a great club. A special mention to Mal Brannigan, who I enjoyed an excellent day-to-day relationship with, both as a friend and a colleague.

“Throughout my tenure, I have been fortunate to work with some excellent staff and as a collective, I would like to thank them all for their efforts, hard work and commitment to the football club and me as the manager.

“Thank you to the players for their application and attitude in everything we achieved and for creating such a great learning environment.

“Lastly, the heartbeat of the club, the fans who have supported unwaveringly at the best of times but most importantly, who have come together during the most trying times, for this you will always be successful.

“I will always be eternally grateful for the support given to me and my family, I wish the club and my successor every success in the future, as they have a fantastic group of people to work with. I look forward to seeing you all soon.”

Webb Telescope Switched Off And On Again After Strike By Galactic Rays, Says NASA

A Hidden Food Web Exists in The Desert, And It Thrives on Death : ScienceAlert