Alessia Russo sealed a remarkable comeback in stoppage-time as Manchester United stunned Arsenal 3-2 to inflict a first defeat of the season on the WSL leaders.

Arsenal were five minutes away from a seventh-consecutive victory after second-half goals from Frida Maanum (46) and Laura Wienroither (73) cancelled out Ella Toone’s first-half opener (39).

But Miller Turner’s equaliser (85) drew United level before Russo silenced the majority of the 40,064 fans inside the Emirates Stadium when she headed a dramatic winner in off the underside of the crossbar (90+1).

United’s sixth and biggest victory of the season lifts them level on 18 points with leaders Arsenal, who tasted defeat in the WSL for the first time in 15 games.

Player of the match: Alessia Russo

The Gunners had won their first six games of the season by an aggregate score of 18-1, and 14 on the spin in the WSL, but appeared gripped by first-half stage fright as another landmark WSL crowd packed into the Emirates.

United grew in stature with each passing minute, with goalkeeper Manuela Zinsberger called into action to deny Toone before the Gunners stopper unconvincingly flapped at a cross and had Beth Mead to thank for clearing the danger.

Zinsberger would not get away with another one, with Toone improvising brilliantly to turn in United’s opener after the goalkeeper failed to deal with a cross from the right six minutes before half-time.

United were deserved leaders at the break but that lead would last just 34 seconds, Maanum’s heavily deflected long-range strike fortuitously hauling Arsenal back on level terms.

Vivianne Miedema made her much-anticipated return to first-team action and was at the heart of a late Arsenal surge which culminated in the Gunners taking the lead for the first time.

Katie McCabe’s stunning cross from the left – the best of the game – found the late-arriving Wienroither in the area and she unerringly dispatched first time to give Arsenal a lead they thought would secure another victory.

But United had other ideas. Five minutes from time, Turner met captain Katie Zelem’s cross and planted an equaliser past Zinsberger in the Arsenal goal, before Zelem’s corner reached Russo and she completed a dramatic turnaround in added time.

Russo: Second half a ‘whirlwind’ 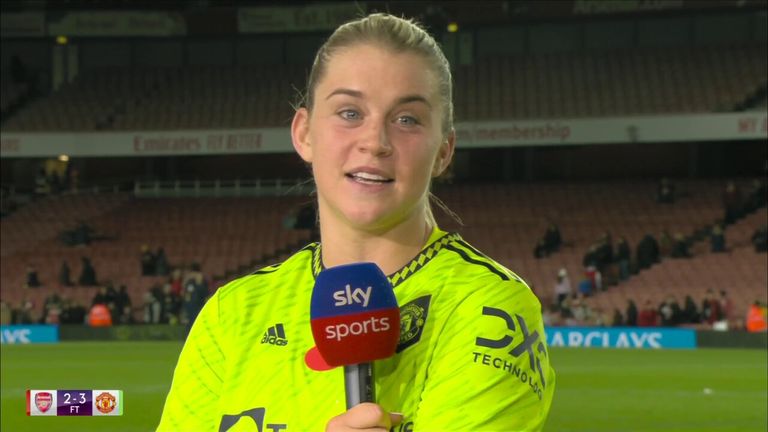 Alessia Russo speaks to Sky Sports after she scored the winner in a 3-2 win against Arsenal.

Man Utd matchwinner Alessia Russo told Sky Sports: “The whole second half was a whirlwind, we come to these games and want to test ourselves and come away with three points so we’re really happy.

“The result reflects that belief; the moment we’d conceded we came in as a group and we had an honest conversation. We knew we wanted to win it and we knew we could so it’s just about finding that bit of extra motivation.”

“When we’re on the pitch especially in front of 40,000 people we can’t hear what’s coming from the side so we have to take ownership as players and that’s what we did tonight.

“We go into every game hoping and ready to get three points. We know where we want to go as a team but we also know what it’s going to take and moments like tonight show that.” 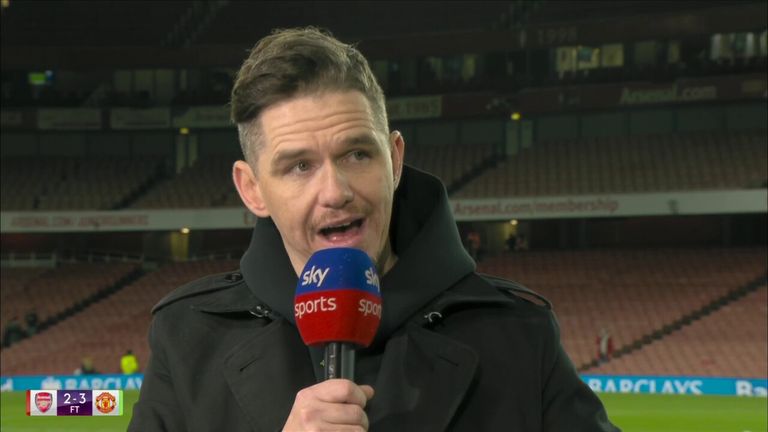 Marc Skinner speaks to Sky Sports after Manchester United leave it late to come back from behind to get a 3-2 win over Arsenal away from home.

Man Utd manager Marc Skinner told Sky Sports: “I’m surprised I can still talk. It was an amazing performance. I actually felt when we went 2-1 behind, that we would come back. I asked them before the game to show personality in these bigger games and I’ve had that in abundance tonight so I’m the happiest manager on the planet.

“What we probably lose out on with the other teams is the experience we have, but nights like this give us that. When you become autonomous on the football field and make your own decisions you become a ruthless team and that is what we saw in the performance tonight.

“Just believing you can get over the line is something hard to coach. You have to work with the individual to help them believe that. We know we have wonderful talent but if you have the experience like we had tonight to get over that and be successful. It will help us grow.” 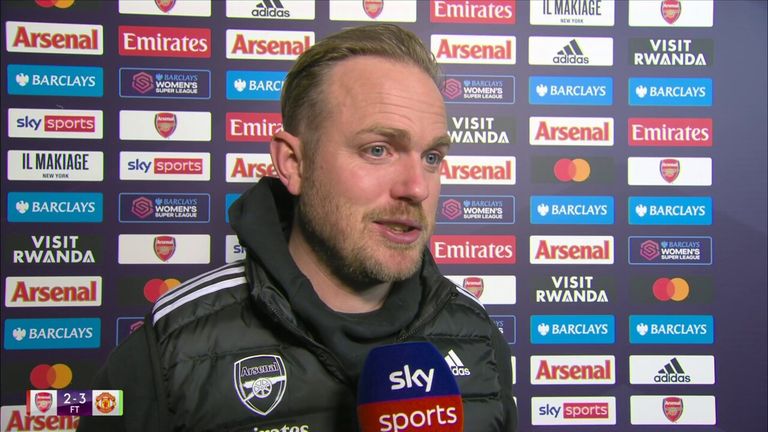 Arsenal head coach Jonas Eidevall told Sky Sports: “We conceded when we were leading so we turned that around. United are good at set pieces but if you concede a corner and a free-kick like that then it’s dangerous.

“Unfortunately, the overriding feeling is disappointment, but we keep on going. There were things we did well today there’s things we’re disappointed with.

“It’s about keeping our heads up high and recovering and getting ready for game against Juventus.”

“[A tight title race] is not the thing I care about, I care about getting ready for the next game and trying to make as good a performance as possible.”

Arsenal are in Champions League action on Thursday as they face Juventus in Italy with the Gunners looking to consolidate top spot in Group C. Jonas Eidevall’s side then return to WSL action on Saturday December 3 as they host Everton in a 2pm kick-off.

Manchester United have a two-week break with Marc Skinner’s side next in action on Saturday December 3 as they host Aston Villa in the WSL, live on Sky Sports.

A stressful marriage may harm your heart health, study finds

Webb Telescope Switched Off And On Again After Strike By Galactic Rays, Says NASA

A Hidden Food Web Exists in The Desert, And It Thrives on Death : ScienceAlert